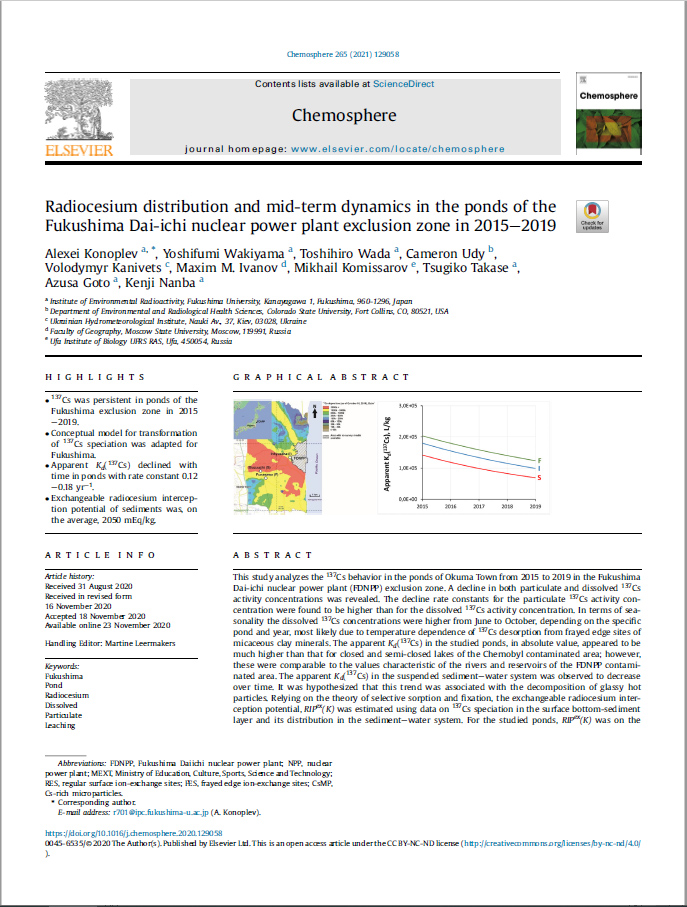 This study analyzes the 137Cs behavior in the ponds of Okuma Town from 2015 to 2019 in the Fukushima Dai-ichi nuclear power plant (FDNPP) exclusion zone. A decline in both particulate and dissolved 137Cs activity concentrations was revealed. The decline rate constants for the particulate 137Cs activity concentration were found to be higher than for the dissolved 137Cs activity concentration. In terms of seasonality the dissolved 137Cs concentrations were higher from June to October, depending on the specific pond and year, most likely due to temperature dependence of 137Cs desorption from frayed edge sites of micaceous clay minerals. The apparent Kd(137Cs) in the studied ponds, in absolute value, appeared to be much higher than that for closed and semi-closed lakes of the Chernobyl contaminated area; however, these were comparable to the values characteristic of the rivers and reservoirs of the FDNPP contaminated area. The apparent Kd(137Cs) in the suspended sediment–water system was observed to decrease over time. It was hypothesized that this trend was associated with the decomposition of glassy hot particles. Relying on the theory of selective sorption and fixation, the exchangeable radiocesium interception potential, RIPex(K) was estimated using data on 137Cs speciation in the surface bottom-sediment layer and its distribution in the sediment–water system. For the studied ponds, RIPex(K) was on the average 2050 mEq/kg, which is within the range of values measured in laboratory studies reported in the literature.

Brief information on the use of the analytical sorbent ANFEZH produced by Eksorb Ltd from the text of the article:

Raw water from the ponds was sampled once a month in 2015–2017 and at least once every two months in 2018–2019. Approximately 4 L water samples were collected from the surface layer of about half a meter depth and then filtered through 0.45 μm membrane filters (Merck Millipore Ltd, Germany) in the laboratory. Suspended sediments were collected on a filter, and the filtrate was allowed to flow through two cartridges of ANFEZH (a commercial sorbent based on cellulose that is impregnated with iron hexacyanoferrate (EKSORB Ltd., Russia)) to separate and immobilize dissolved radiocesium (Remez et al., 1998, 2016). More than 98% of dissolved 137Cs in each water sample was captured by the first cartridge. The total activity of dissolved 137Cs in a sample A0 was calculated as follows:

A0 = A12 / (A1−A2), where A1 and A2 are the 137Cs activities captured by the first and the second ANFEZH cartridges, respectively. Water temperature and conductivity were determined in situ using a multi-parameter water quality checker U-50, Horiba, Ltd., Japan.

All measurements were performed in the analytical laboratory of the Institute of Environmental Radioactivity at Fukushima University.

The activity concentrations of 134Cs and 137Cs were determined in suspended material, as well as in ANFEZH sorbents. This was done based on gamma spectrometry using a GC3018 high-purity germanium detector (HPGe) by MIRION Technologies (CANBERRA), Inc., USA.

The full text of the article can be found at the link: